Lovie: ‘Our team is clean’

CHAMPAIGN — Turns out Wisconsin won’t have to worry about starting fourth-string quarterback Danny Vanden Boom against Nebraska after all.

With Jack Coan out indefinitely following foot surgery and reports of positive COVID-19 tests for Week 1 breakout star Graham Mertz and his backup Chase Wolf, it was looking like Vanden Boom or bust against the Huskers. Now Saturday’s 2:30 p.m. game in Lincoln, Neb., won’t be played — the first cancellation in a delayed Big Ten football season with zero wiggle room on the schedule.

Wisconsin announced it was pausing all football-related activities Wednesday and cancelling its game at Nebraska because of an elevated number of positive COVID-19 cases in the program.

Illinois, of course, is coming off a trip to Madison, Wis., last week that resulted in a 45-7 season-opening loss last Friday night. The news of Wisconsin’s outbreak broke while the Illini were practicing Wednesday morning, and coach Lovie Smith followed up after practice that his program currently has zero positive cases.

“Our team is clean,” Smith said in a post-practice Zoom call. “As you can see, we’re kind of hunkered down in the bunker. We have a protocol in place that we follow daily. We assume everybody else is doing the same thing. I know things can change. I know there’s an outbreak all over the country right now. Right now, for our football team, not much has changed. 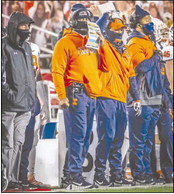 Illinois football coach Lovie Smith said Wednesday morning his team is ‘clean’ in regards to COVID-19, the same day Wisconsin paused football activities for the next week after multiple cases of positive COVID-19 tests. The Illini lost 45-7 at Wisconsin last Friday night in the season opener for both teams.

“Does that mean we’re not going to have positive tests that pop up? No, that’s society right now. That’s what’s happening in our country and in the world.”

“(Wednesday) morning I received the news that I had tested positive via a PCR test I took (Tuesday),” Chryst said in a statement. “I informed my staff and the team (Wednesday) morning and am currently isolating at home. I had not been experiencing any symptoms and feel good as of (Wednesday) morning. I am disappointed for our players and coaching staff who put so much into preparing to play each week. But the safety of everyone in our program has to be our top priority and I support the decision made to pause our team activities.”

“When we go and play a team, we assume that both teams are clean,” Smith said. “That’s what you have to assume. We control ours. That’s how we look at it. There’s a reason why we played a Big Ten-only schedule. We trust what everybody’s doing. I feel comfortable with that.”

Smith said Illinois has continued to follow its COVID-19 protocols this week per usual.

“We take all the precautions that we can possibly take,” he said. “That’s what we take. Extra? You should never get to extra. You should always be taking the proper precautions to try and guarantee that there’s a safe playing field, period.

“With our football team, that’s what we do. We practice social distancing as much as we possibly can playing football. Guys have their masks on. We daily test. Our medical staff stays on top of it. What else is there to do?”

Wisconsin’s decision to pause all football activities for at least seven days was made by athletic director Barry Alvarez and Chancellor Rebecca Blank in consultation with the Big Ten. Saturday’s game will not be rescheduled and will go down as a no contest for both teams. Nebraska is coming off a 52-17 loss at Ohio State last Saturday. Illinois (0-1) is set to play the Cornhuskers (0-1) on Nov. 21 in Lincoln.

“We have said from the beginning that the health and safety of our student-athletes, coaches and staff members comes first,” Alvarez said in a statement. “Over the past several days, we have seen a rising number of student-athletes and staff contract the virus. The responsible thing for us to do is to pause football-related activities for at least seven days.” Chryst is the second Big Ten coach to test positive for COVID-19. Purdue’s Jeff Brohm was the first, and he missed the Boilermakers’ 24-20 home win against Iowa last Saturday. Brohm returned to the Purdue team facility Wednesday and will likely be on the sidelines Saturday in Champaign when Illinois hosts the Boilermakers.

“The University of Illinois right now is playing a football game against Purdue,” Smith said. “Wisconsin has their own things, but we’re playing football right now and pretty pumped up about that. Hopefully we can stay clean and get a chance to do that.”