Shaffer, a son of Dyke and Kendra Shaffer, is a 2021 graduate of Blue Ridge High School.

“As a state officer, it is my goal to continue to share my passions, experiences and leadership with others,” Shaffer said. “I hope I can inspire the next generation of FFA members.”

Another award for Shaffer was the Agricultural Sales Placement State Proficiency recognition.

For his supervised agricultural experience, Shaffer works at Corneglio Ag, a small hardware store in Farmer City. He assists local community members, farmers and agricultural service companies to find what they are looking for.

The chapter was also recognized for coordinating a local campaign for the Illinois Foundation FFA that raised $3,000.

The five officers were elected from a group of 10 finalist candidates selected by a committee in early May. Each officer puts their collegiate pursuits on hold for one year to serve the Illinois Association FFA in a full-time capacity.

The 93rd annual state FFA convention was hosted in person and virtually.

Armstrong chapter’s Makayla Learned was installed as president of the Illinois FFA’s Section 18.

The 25 newly-installed section presidents are members of the 2021-2002 Illinois state officer team.

The Gibson City-Melvin-Sibley chapter was recognized for coordinating a local campaign for the Illinois Foundation FFA, which raised at least $3,000. The chapter’s fundraising total was $4,000.

The LeRoy chapter was recognized as a Foundation $3,000 Club Award recipient for meeting the goal of raising $3,000 for the Illinois Foundation FFA.

She buys these products from her family’s farm, Fox Creek Cattle, and markets them on social media.

Beau Mumm of the Monticello chapter was recognized as the recipient of the Diversified Agricultural Production State Proficiency Award.

Mumm is a son of Jason and Megan Mumm of White Heath. His FFA advisers are Elizabeth Rost, Alicia Burger and Tucker Muse.

For his supervised agricultural experience, Mumm keeps records on his sheep and forage production projects. A few years ago, he started a herd of Tunis sheep, which he raises to show all levels of the industry. He recently added 10 acres of forage that he produces and harvests to keep his sheep to cut down on feed costs.

PBL chapter member Christina White was installed as Section 17 state president. She is a daughter of Mike White and the late Julie White. Her advisers are Mike White, Aaron Slack and Kirsten Wyatt White won several other recognition awards. She was recognized as a Star in Agriscience finalist. For her supervised agricultural experience, she keeps records on two experiments — one in which she works with Eden Park Illumination in Champaign to see if its ultraviolet micro-plasma light system helps with the growth of vegetables, particularly lettuce, and the other performing slake tests on different soil types to study soil health and the effects of regenerative agriculture.

White was also recognized as one of the 10 outstanding chapter presidents in the state for exceptional leadership and service. The award is sponsored by the Illinois Farm Bureau.

White was recognized as one of the top four outstanding section reporters in the state for exemplary dedication and diligence in communicating with chapters and the media throughout the section. The award is sponsored by Illinois Agri-News.

The chapter’s Gracie Wagoner was recognized as one of 10 outstanding chapter reporters in the state for exemplary dedication and diligence in communicating with chapter members and the local media.

The PBL chapter was also recognized as a Foundation $3,000 Club Award recipient for the Illinois Foundation FFA to raise at least $3,000 The chapter’s fundraising total was $7,000.

Participants submit a rèsumè, complete job applications and participated in mock interviews and practicums with a panel of possible employers.

Salt Fork chapter member Wyatt DeAth was named a State Discovery Star Farmer winner. He is a son of BJ and Laura DeAth of Indianola.

His advisers are Jodie Boen and Stacey Rickard.

For his supervised agricultural experience, DeAth keeps records on his beef cattle cow/ calf operation, sweet corn patch and soybean production projects on the family farm. He manages seven head of cattle, a sweet corn patch in the summer and a little more than 10 acres of soybeans throughout the growing season. He makes it a priority to work safely and reflect on his work so he can make better decisions when expanding his project in the future.

principles to agriculture and agribusinsses. Cargill sponsors the event.

The chapter’s team of Olivia Shike and Emma and Rachel Aders was recognized as State Winner Horse Evaluation (With Reasons).

The competition requires team members to evaluate and rank horses based on breed characteristics, conformation and performance. Students also provide oral reasons to describe and defend their placings.

Emma Aders was recognized as the top overall participant in the event.

Shannon Flavin of the Unity chapter was recognized as a Vegetable Production State Proficiency winner. She is a daughter of Bill Flavin of Ivesdale and Dawn Huzenga of Tolono. Her chapter adviser is Rich McCabe.

For her supervised agricultural experience, Flavin grows and sells 35 varieties of pumpkins. She is responsible for every aspect of her project, including managing and marketing her crops. During September and October, she sells her pumpkins at her farm, roadside stands and wholesale auctions.

The chapter’s Olivia Shike was recognized as a top participant in one of the six system categories of the Illinois FFA Agriscience Fair. Students gain real-world, hands-on experiences in agricultural enterprises and use scientific principales and emerging technologies to solve complex problems related to agriculture, food and natural resources. 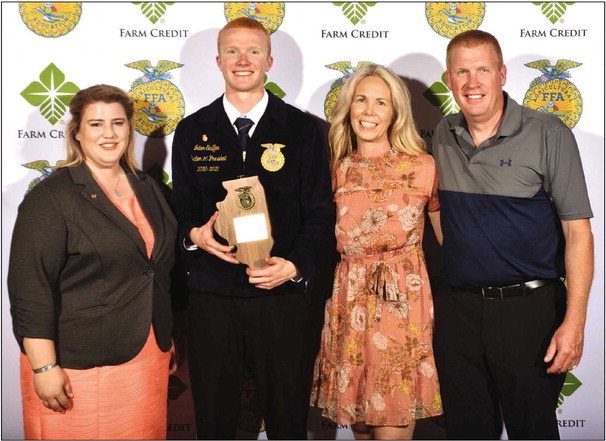 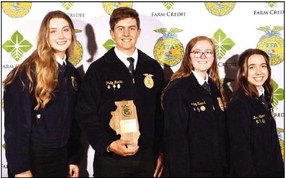 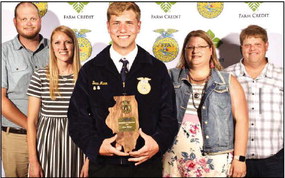